The month of May will be full of learning. We will offer you an online clinic every Monday evening in May. Each clinic will include 2 lectures. And we try to make the topics very broad, through offense, defense, special teams and football in general.

To register to our online clinic, please send an email to: anmeldung@247afs.de
Registration will be for all Clinics in May. Registration fee is € 19.95

Please send the following information with your registration to anmeldung@247afs.de
– Full Name
– Team you are coaching for
– Coaching Position you have in the Team

The Online Clinc series in May will again have some coaches from the USA as speakers. Among other things High School Coaches, College Coaches, Ex NFLE Coaches.

Zak Pfeffer (Feh-fer) was named the defensive coordinator of the football program in January 2020. The 2020 season will mark his first season at Carroll.

Previously, Pfeffer was the defensive back coach/camps director at UW-Eau Claire for four seasons. While at UW-Eau Claire, Pfeffer was a part of a defense that became one of the best in the WIAC, cutting scoring defense and rushing yards allowed per game in half in four seasons. His Blugold team led the WIAC in sacks, including a year with 38 team sacks. Pfeffer was in charge of recruiting for his position, maintaining player academic standards, and oversaw budgeting, planning, and enrollment tracking of student-athlete summer camp programs.

Six years after putting the wraps on a remarkable quarterbacking career at UMD, Chase Vogler returned to his alma mater in 2019 to take over as the Bulldogs‘ offensive coordinator. He had spent the previous five seasons on the University of Wisconsin-Stout coaching staff, including the last three handling the offensive coordinator role.

Vogler was hired as Wisconsin-Stout’s game coordinator/quarterbacks coach in 2014 and two years later was promoted to offensive coordinator. During his three seasons in that position, he helped produce 13 All-Wisconsin Intercollegiate Athletic Conference honorees. Among those was Levy Hamer, who paced the conference in receiving yards in 2018. This past season, the Blue Devils ranked third among WIAC schools in both overall total offense and passing yardage. After coaching professionally as the offensive coordinator with Germany’s Bielefeld Bulldogs during the summer of 2013, Vogler returned to UMD that fall to serve as a volunteer assistant coach (defensive secondary). He also had a short graduate assistant stint at Western Illinois University, where he was reunited with his collegiate head coach, Bob Nielsen, before joining the Blue Devils in 2014.

Peter Vaas joined the University of South Florida football coaching staff in January 2010 to serve as an assistant coach with the Bulls in charge of quarterbacks. He transitioned to coaching the tight ends for the 2012 season.

Vaas joined the USF staff after one season as the offensive coordinator at Miami (Ohio). Prior to his stint with the RedHawks, Vaas spent the 2007 season as the offensive coordinator and quarterbacks coach at Duke. Before joining the Blue Devils, Vaas spent two seasons on Charlie Weis’ Notre Dame staff as the quarterbacks coach with the Fighting Irish for the 2005 and ‘06 seasons.

Brian Michalowski is in his second year as outside linebackers coach at Colorado, as he was promoted into the position in mid-February 2019 after he originally joined the staff as the director of quality control for the defense on January 7 of that year. He was one of four assistant coaches retained by new head Karl Dorrell ahead of the 2020 season.

Michalowski, 30, came to Boulder after spending one season in a similar capacity at the University of Georgia, where he worked alongside former CU head coach Mel Tucker and CU defensive coordinator, Tyson Summers. At UGA, he worked with outside linebackers and helped the Bulldogs post an 11-3 record, claim the Southeastern Conference East Division title and earn an invitation to the AllState Sugar Bowl. Georgia was ranked No. 8 in the final polls and was 13th in the nation in total defense.

A veteran defensive coach who has worked at all levels of college football, Brian Ward was named the defensive coordinator of the Nevada football team, head coach Jay Norvell announced on Jan. 29, 2020.

Norvell said the Wolf Pack will run multiple-front looks on the defensive side moving forward under Ward, who will also coach linebackers at Nevada.
Ward comes to Nevada after a four-year stint at Syracuse with the Orange. He was hired as DC in 2016 and added the role of linebackers coach in 2017 and
the rise of the Syracuse defense played a large role in the Orange’s win over No. 2 Clemson in 2017 and its 10-3 season in 2018.

Ward’s defenses at Syracuse were nationally relevant, including back-to-back seasons (2017 and 2018) in which the Orange led the nation in turnovers forced in 2018, forced more turnovers in 2017 and 2018 than any other FBS team in the nation, and finished in the top 15 in third-down defense. Syracuse was also top-six nationally in 2018 in turnovers gained, interceptions, fumbles recovered and sacks, while also setting the school record for sacks. He helped develop a quintet of players into All-Atlantic Coast Conference selections during his time with the Orange.

Before joining the Orange, Ward served as the defensive coordinator and linebackers coach for Bowling Green in 2015. He oversaw a defense that improved in several statistical categories from the previous year and featured two All-MAC selections at linebacker, including first-team honoree Austin Valdez. Ward also served as Bowling Green’s head coach for the 2015 GoDaddy Bowl versus Georgia Southern.

Ward was a nominee for the Broyles Award – given to the nation’s top assistant coach – in 2017 at Syracuse and he was one of three FBS finalists for Linebackers Coach of the Year from FootballScoop.com in 2015 while at Bowling Green.

Ward’s defensive improvements were a major factor in Bowling Green winning the 2015 Mid-American Conference (MAC) title. The Falcons surrendered 4.6 fewer points and nearly 76 yards less of total offense per game than they did in 2014. In addition, Bowling Green moved up the NCAA statistical rankings in passing defense (up 44 spots), rushing defense (up 20 spots), scoring defense (from 106 to 84) and total defense (from 115 to 86). Bowling Green finished 13th nationally in turnovers gained (27) and eighth in interceptions (20). Valdez was the leader of the unit, racking up 144 tackles and ranking 10th in the FBS in tackles per game (10.3).

From 2012-14, Ward was the defensive coordinator at Western Illinois where he molded the Leathernecks into one of the top defenses in FCS football. Ward’s 2013 unit ranked seventh in the nation in total defense (305.3 ypg) and third nationally in passing defense (149.0 ypg). The next year, the Leathernecks put on one of the most impressive defensive displays of the season against Wisconsin running back Melvin Gordon. Western Illinois held the Heisman Trophy finalist to 38 yards on 17 carries (2.2 yards per carry).

During Coach Iverson’s 13 years as a head coach (Pewaukee/Mukwonago) he compiled 93 victories vs 44 defeats. His teams qualified for the WIAA tournament 10 years in a row. Reaching the round of eight four times and making one Final Four appearance.

Coach Iverson has coached 5 conference players of the year and over 70 All conference selections. He was the prep Coach of NFL Players JJ, TJ and Derek Watt.

Coach Iverson attended New Berlin Eisenhower High School where he was all conference in both basketball and football. He attended UW-Eau Claire where received a marketing degree as well as lettering in football four times. As a Bluglod he was named captain his senior year and helped lead Eau Claire to a conference title, and a National Semi Final appearance in 1998. He was named All Conference and 1st team All-American that year as well. He then played football overseas in Germany, where he still helps run camps and does international football clinics. 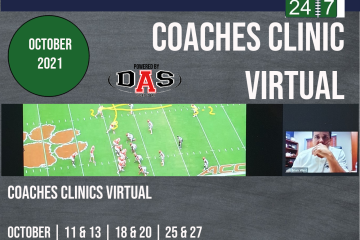 The month of October 2021 will be full of learning. We will host several Online Clinics for you, every Monday and Wednesday in October. We are trying to mix the topics on Offense, Defense and Read more…